After looking at the course notes and following my research which looked at Mr Bruce Gilden (see learning Log) I set off to capture a number of images using a lens set to 28mm. With the days now short I initially set off to Farnham but I did not manage to get any shots I liked. 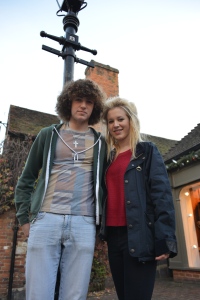 The second attempt was better but I still wasn’t sure that I was getting the results that the exercise required.

I therefore got on the train and set off to London, where I thought I would have a better chance.

Firstly I got a few images at Waterloo Train Station.

I took this image at the station, I liked the contrast between the girls red hair and the grey background. After I reviewed the image I felt as though I should have got a lot closer. 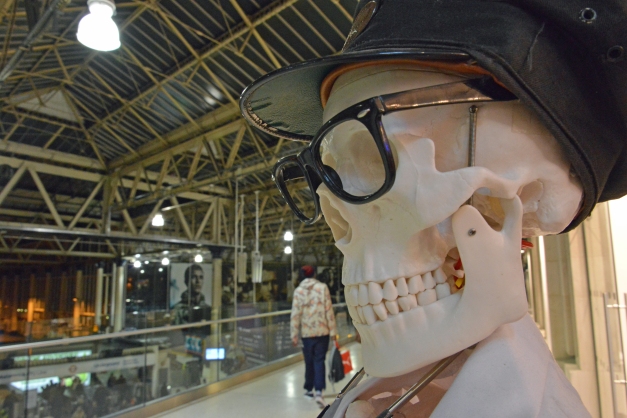 I know that this isn’t a person , but I liked the image. I waited a short time to capture a person in the back ground to show scale.

This was the image that I thought started to look like the sort of images that I wanted for the exercise. They really are in the centre of the image. 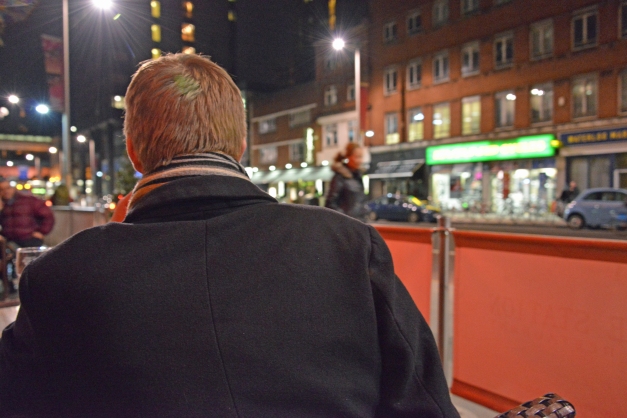 I was dark outside and I wanted to see what the contrast would be. I asked this guy , who was having a beer outside, if I could take his picture. The depth of field could have been better but I still think the idea is there.

As I was taking picture this guy approached me for some cash. He said I could take his picture in the street.

I was able to get a lot closer to him and I really liked the result. I took a second image as below.

This is the second image that I took. I like the contrast of the red bus in the background. The last two images were the ones that I think are closest to the “Gilden” type images.

As the notes said, this was a very hard exercise to do. People were cautious about having their images taken. Except the last guy and the skeleton!

The advantages are that you can get great detail in your images and you can time the shot so that there is interest. You don’t want to take the viewer’s eye from the subject but the background is important.

An interesting exercise, which will lead onto a further exercise called Standard Focal length.