…..The mechanics of this exercise are simple, but the results are many and varied. Find a comfortable situation and concentrate on bursts of activity from which you capture the best moment….. simple really? Well lets see.

I set out on Saturday morning to capture a series of images that I could use for this exercise. Before I did so I looked at the example in the course notes and also on a photographers website that I find greatly inspirational, Andrew Shaylor.

Look at this great image

After you have looked at the image for a short time just read this simple paragraph to see how he does it.

“Those tricks one uses to photograph people unawares include pretending to be deeply interested in some object, in this case a Bruce Denny sculpture, whilst framing the photograph to include what one really wants to photograph. The idea is to give the impression to your subject, in this case a resting gentleman, that you are not pointing the camera their way. Sometimes this duplicity fails, but I do like the contrast of the hand gestures of the sculpture, and the hand gesture being deployed in my direction.”

With this in mind I set off to a local farmers market to see what I could do. I knew it would be busy so I decided to concentrate  on one member of staff on one stall that is usually set up outside a local bank.

I decided to try to capture the lady in the black and white striped top.

Here are some of the images that I captured in a contact sheet: 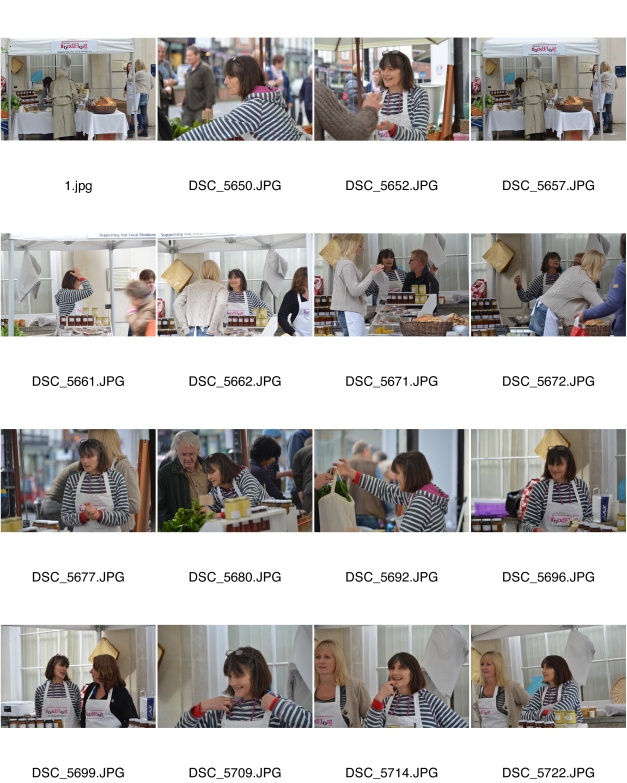 Images of the day

Of course in the limited space of the market stall I was never going to be able to catch the subject about to run off or make exaggerated movements so I decided to try to catch her facial expressions and hand movements as she served customers.

Of the images above I like the following shots for the reasons stated :-

I like  this shot of the lady leaning over to serve a customer as it sets the scene nicely. I have captured a moment in her day,  it’s not that dynamic or exciting but I think it is a good introduction.

Here I like the look on her face and the movement of the mans hand as he hands over the money .

I like this shot because of the way that they are both looking down at the lettuce. It forms a nice triangle

She hands over the bag of shopping to an unknown person with only a hand on show.

Getting ready for action, I like the red in the sleeves, and the different shades of white in the background.

I don’t really know why I liked this picture but is was if she was posing for me but she wasn’t.

I took this image as both of the ladies were chatting to a customer, whatever say were saying caught their attention.

This exercise was called capturing the moment. Have I done was I was asked to do? Have a produced a set of images that capture  a moment in time? Well in a way all images capture  a moment that will never be repeated . But I was after that special moment, a look on a persons face, a gesture, a smile or a reaction to something that is happening to them.

I think I have managed to do what I was asked. They may not be the most exciting set of images but they will never be repeated!