Today I went up to London to see an exhibition at the Museum of London. After  catching a train to Waterloo I walked , in the rain, to the City  of London where behind St Paul’s  I found the Museum. The guide stated that there were over 200 images in both black and white and colour taken by various photographers. One of them hid his camera in a parcel so people would not see him taking the pictures! And this was in the 1890’s.

I saw an advert for the  exhibition at a tube station where they used this image :- 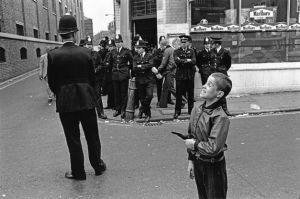 Which I thought was great, it is the look on the lads face together with the line of officers who appear to be taking no notice of him that really caught my eye. I was determined to pop along and see what else was on show.

As I walked through the exhibition what struck me most was the quality of the images some taken over a 100 years ago. The subjects ranged from homeless people to kids playing in the street. Each and every one of them gave  me both inspiration and ideas for future projects.