As I looked through the work for the next few exercises this one caught my eye. Not only did I like the examples as shown, especially the set of stairs, but I felt as though looking for further examples would be fun. I hoped that it would involve taking images in different locations. I wanted to replicate  one of the images so I set off to Winchester to take  images that displayed curves.

Before I set off I looked at the previous images that i had taken before, the following image of the train tracks running into Dorking Station looked like it would fit into

Although the curve does pull your eye along towards the train I don’t thinks that they add “grace and elegance” to the image.

So as I said I went to Winchester, where I captured these images. 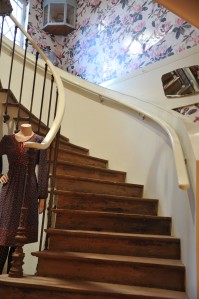 This image was taken inside a shop. Here the stairs clime gracefully up away from the manikin  with the dress. The steps contrast well with the sides of the stairs.

In this example I can see that the words “grace and elegance” could be used.

As you can see for my second image I decided to find a further set of steps, this time they were in a church.

The lighting was poor and the steps and rails dark. I had to increase the iso up to 6400 as I was shooting by hand.

This time I took a close up of the rail and the ornate end.

I hoped that the way that the rail was framed in the shot would lead your eye through the image, but maybe on reflection I have cropped it too tightly.

Again this image is from a shop in the High Street in Winchester, I have added this one as an extra as the goods on display are actually placed within a circle.

It was different to the normal square window displays that you see. I wanted to see if placing the goods in this type of display made them more attractive to the shoppers.

I asked my wife, April, and she said that it was a more attractive image and the circle draws the eye towards the display. Not really a cross-section of the public, but it went some way to proving a point to me, that taking this type of image does pull the eye, the shops must know this and that is why it was done this way.

My fifth image was taken in Surrey. I walked over this bridge a few time before I decided which side to take the picture from.

This image was taken a few days after I returned from Winchester. AS soon as I saw the bridge I saw the curve and that if I captured it correctly your eye would be drawn over the bridge to the track and woods beyond.

In a way this image proved to me the concept  of the course, learning in stages, building up my knowledge and hopefully my skills to not just snap away but to think before you take a picture. Before I press the shutter release I should be asking what do I want the end result to look like? I should also have in the back of my mind what am I attempting to say to the viewer remembering what my tutor said though, what I think the picture is saying may be a lot different to what the viewer thinks. Of course I had the benefit of seeing what was around the image as I took the shot.

I hope you enjoy the above images, a great exercise.