The next exercise required that I take images with two focal points. As it said in the course book getting this type of image was not easy. After walking around London and taking a few images i was not too happy with the results except for an image of the River Thames.

The first image that I managed to take was of two Helicopters flying around a ship in port.  I waited for a while as they flew around until I had one in the foreground  and one further away. 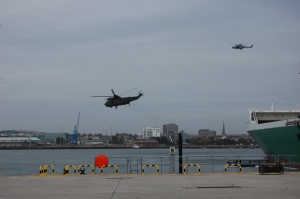 I think that  as you look at the image you see the first Helicopter first, then as you look around the frame the second one comes into shot. I think that the boat links them together. I don’t know if I should have cropped the image so that the larger aircraft was closer to the edge of the frame as mentioned in the first exercise. I may leave this for my tutor to comment on?

The second Image I took  was from Westminster Bridge in London. I saw the London Eye in the back ground but I needed  something big the fill the foreground. After waiting for half an hour a large ship pulled into the frame.

It was a great piece of luck as the ship had a red front and this matched the red brakes on the bottom of the wheel. I think that the boat in the front would attract the attention of the viewer first than they could look over the Thames towards the wheel.

Here is the image with the points marked

Although It may be the case that the wheel (London Eye) is a little too big, should I have got closer to the boat and made the wheel smaller?

The next part of the exercise was to take an image that has two points that attract equal attention,  a human face.

I used an image of a model that I took on a course last year. 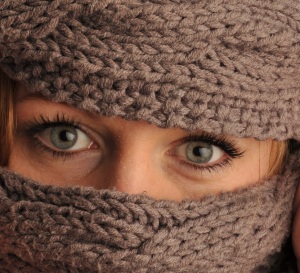 Marked with points and eyes leveled.

It was an interesting exercise especially the  last part where the above image was examined. You do look at a persons eyes when you look at this type of picture so there are important lessons  for the photographer.

Part  two of the course relates to Design.  It is a concept that I have to admit I had little knowledge about, but after reading the study material and doing some further research I looked at some previous images that I had taken to see if I had been capturing a point  without knowing the exact name for it.

One particular  photographer that I have been reading about , Peter Ensenberger, from the USA made some interesting comments about Points, design and rules.

“Faithfully following all the “rules” of composition will not necessarily culminate in a good photograph. The rules are intended more as guidelines than strict dogma, but they will help you design well-balanced images that are pleasing to the eye.”

Mr Ensenberger also makes a further comment that a  “photograph can successfully tell only one story.” This was great advice and it reminded me that I should not “clutter” up my images with items that distract the viewer.

This exercise was described as straightforward,  you had to place an object in a single point in the frame.

For an object to qualify as a point it has to be ‘small in the frame and contrast with its surroundings.

I looked at some of the images that I had taken  and although they were single points in the frame they did not, in my view, qualify as a point.

The following did not qualify. 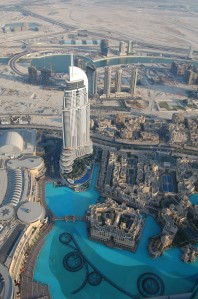 Well, why do I think that the above images, although I think they are good images, did not meet the standard to be a point. In my view it’s because the main point of interest  ( The building and the two stone faces) are just too big.

I decided to take a trip back to the South Coast. I was asked to take a number of images and in each one position the point in a different place.

The background has to be plain and even  so I decided to use the clear blue sky.

Here are the images that I have chosen. 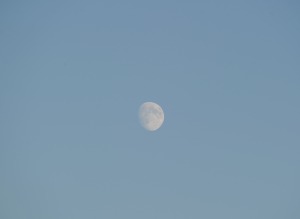 (It would have been better if the sky behind the first two images had a little more detail, but this is what I had in front of the lens!)

Looking at each image 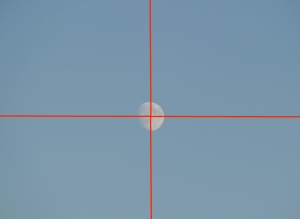 Point in the centre

After reading where the points should be I tried to place the moon to the left, the right  and then higher or lower in the frame. It did just not look good. So , I just placed it right in the centre of the frame. I think that I should also have zoomed in closer to the moon to get greater detail.

Point to the right

I took this image of the helicopter and I knew that it had to be on the right of the image.  A rule that I had previously been taught that a model should look into a space made me think , should the aircraft also fly into the space?.

The helicopter   is next to the edge of the frame so it looks bigger, I also cropped the image a little to make the helicopter stand out.

The person on the ropes was swinging up and down at quite a fast speed. I wanted to see if I could get this over to the person who was looking at the image. The first shots I took was with the girl going up in the air. I placed her at the bottom of the shot but I did not like the result. There was not enough movement in the image.

I waited for the girl to come down and realised that the best place to see movement was in her hair, as you can see. But this was not noticeable when she went up. Placing her at the top of the frame going in a downward motion I wanted to have space for her to fall into. I liked the finished result and this image gives a good example of movement.

I enjoyed this exercise but if I get time I may have a look at it again to see if I can capture  a further set of images with a different background.

Visit to the V and A, London

Today I went to the Victoria and Albert Museum with Dave Rooney.

The weather wasn’t to good but we managed to take a number of images which I will process over the next few days.

I am hoping to use some of the images for my next few assignments.

(Above image is Stock Photo)

I was informed last week that the two images I put into a competition received 10 out of 10.

The second part of the course is now upon me.

I have read the course notes and  I m planning a trip to London To complete a series of photographs on street design.

I have two images entered into a photographic competition tomorrow.

The Feb 2011 deadline is fast approaching.

Visit to the National Theatre-Landscape Photographer of the Year 2010

I was off work today and I had arranged  to go to London to take some pictures, for my next project, with a friend from work, Dave Rooney. But things got in the way so we had to call it off. We will do it at a later date  as he takes some great pictures and a day out with him would be great fun.

On the way home from work last week I saw a poster at Waterloo Station for an exhibition at the National Theatre .

Take a View: Landscape Photographer of the Year 2010

I decided that it would be interesting to see what images had been  entered and it would keep me out of the cold!
Mr Taylor had also suggested that this type of visit would be a good idea. So off I went up to London for the day.
I have  to say that it was a great day. The standard of images on display were overwhelming. Apparently this is the fourth that the competition has taken place and according to people who I spoke to the standard just gets better and better.
There were pictures of everything from Railway stations to marshes and islands.
Looking at the images on display they  made me realise how much I enjoy taking pictures and on how I would like to, one day , reach a similar standard or try to get close to it. I think a lot more practice is going to be required and a little bit of luck!!

Here is a list of the camera equipment that  I use:- 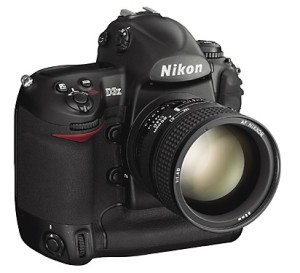 I will add further detail for the next images that I take.